Why I Cultivate Indian Hemp – Native Doctor Confesses To NDLEA

The gallant operatives of the National Drugs and Law Enforcement Agency, have apprehended a native doctor who allegedly cultivates Indian hemp farm in Fakai Local Government Area of Kebbi state. 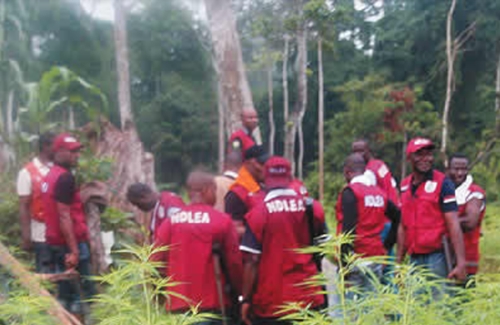 File photo: NDLEA operatives on a cannabis farm
A 55-year-old native doctor has told agents of the National Drugs and Law Enforcement Agency why he cultivated Indian hemp.
The NDLEA in Kebbi had arrested the 55-year-old native doctor, Arage Rikici, who allegedly cultivates Indian hemp farm at Kukun village in Fakai Local Government Area of the state.
The state Commander of the agency, Mr. Suleiman Jadi, told the News Agency of Nigeria in Birnin Kebbi on Wednesday that cannabis farming was unprecedented in the history of the state.
“Sequel to intelligence report, a team of NDLEA operatives in the state on July 24, 2018 discovered and destroyed Cannabis Sativa farm at Kukun village in Fakai local government area.
“The alleged owner of the illicit farm, Mr. Arage Rikici, a 55 year-old native doctor, was arrested and is presently in our custody undergoing investigation.
“This is a dangerous trend indicating a shift — Kebbi from being a drug consuming state to gradually being a drug producing state via cultivation,” Jadi said.
He advised farmers in the state not to indulge in illicit crop farming and to never abandon their legitimate cash crop cultivation.
The commander also urged landowners not to allow the cultivation of cannabis sativa crops, stressing that planting of such crops would affect soil fertility necessary for food crop cultivation.
“We will nip the development in the bud before it spreads,” he said.
He also called on the communities to be on the lookout for cannabis sativa plants in their domains and report same to the authority for prompt action.
Rikici told NAN that he planted the illicit crop for easy accessibility and self- consumption.
“You see, I am a native doctor, and because of my age, I cannot move as my two legs are stiff. In order to have easy access to it, I planted it on my farm which is close to my house, and hired boys to cultivate it for me.
“I sometimes take it to market for sale at N50 per small wrapper,” he said.
Rikici said that he got the seeds from Benin Republic.
Tagged with: NDLEA