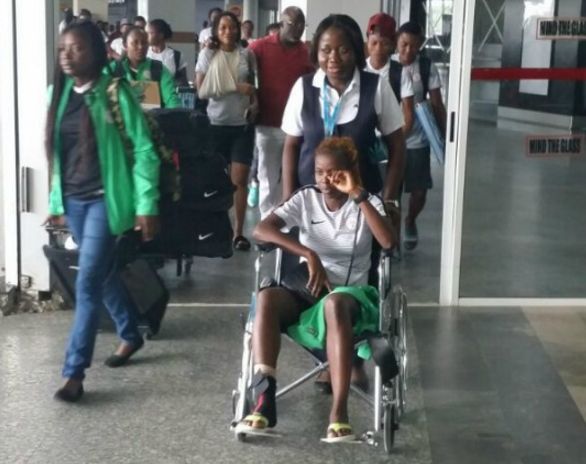 *No Surgery For Injured Star DefenderThere is a silent but dangerous standoff between Super Falcons and the Nigeria Football Federation (NFF) as the team have still been left in the dark as regards their bonuses and allowances.

“No official has been to see the girls at the Agura Hotel. There has been no message from the office (NFF). We are all in the dark as concerns our money,” a team official opened up.

According to African Football, earlier, top officials had suggested the team will be attended to when the banks reopen for business today (Monday).

We have now further learnt that the players were paid 500,000 Naira each and officials received 400,000 Naira for them not to boycott their AWCON semi-final against South Africa.

“What we are asking now is what was the money meant for? Part of our bonuses or allowances?”

The cash situation is so serious that star defender Onome Ebi’s injured arm cannot be operated on at the National Hospital in Abuja.

Ebi suffered a serious arm injury and barely managed to finish the final against Cameroon.

The NFF have not been forthcoming with the money for the surgery, while raising serious questions about whether the team were insured at all.

Midfielder Ngozi Okobi also suffered a leg injury in the final and had to be ferried on a wheel chair on arrival at the airport in Nigeria.
Tagged with: f, football, nigeria