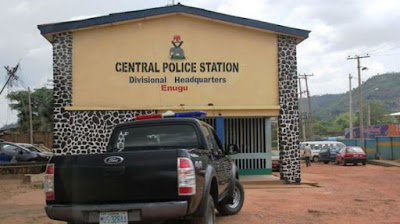 The level of evil some people perpetrate is beyond imagination. Sigh!

A two-year-old girl, allegedly r*ped and sodomised by unknown persons, is lying critically ill at an Aji private hospital in Igbo Eze North area of Enugu State.The girl, who was living with her grandmother at Okpo area of Aji at the time of the incident, was said to have been left with a neighbour while her grandmother, identified as Madam Lauretta Idoko, went to a nearby market to buy food items.

Police sources said when Madam Idoko returned from the market, she found the girl unconscious and took her to a nearby hospital, where some nurses suspected malaria and recommended “MP and widal” tests.

It was alleged that as the health of the girl was deteriorating, Lauretta took her grandchild to another hospital, Divinity Hospital, where it was discovered that her private parts and anus had been penetrated, and were oozing fluids.

Meanwhile, police from the Enugu-Ezike Divisional Headquarters have waded into the matter to ascertain whether the girl was r*ped or used for ritual purposes.

Hospital sources indicated that the Divisional Police Officer for Igbo Eze North, CSP Onyema, ordered his men to move into the hospital following a tip-off from concerned members of the public over the matter.

A senior medical staff of Divinity Hospital told Vanguard, on condition of anonymity, that the little girl’s relations did not notice the unusual state of the patient’s private parts before they brought her to the hospital, adding that it was the doctor that drew their attention to it.